In a tiny village in the centre of York stands a 13-sided playhouse. We rush past stalls offering culinary delights, the pretty Elizabethan garden, and then the portaloos to the ‘groundlings’ entrance. We are almost late for an evening performance of Macbeth.

Some groundlings stand, but I have brought cushions- definitely the right call for the almost 3-hour long performance. We are mesmerised by the celestial ceiling above the stage. Music will soon pour forth from the minstrel’s gallery on high: woodwind, cello and drums. The layout is impressive, considering it was built in three weeks. Ignoring the scaffolding seating behind us, the theatre seems permanent.

Macbeth begins. We are transported. 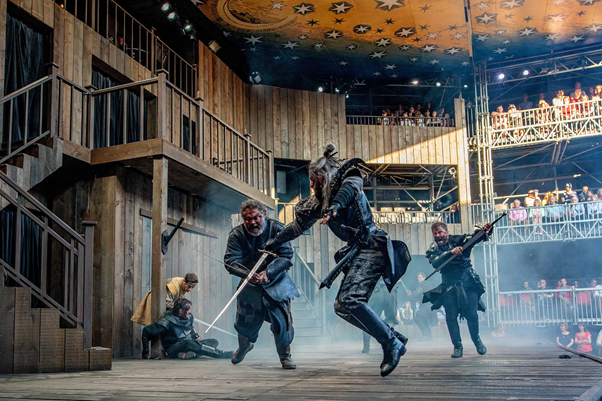 Professor Judith Buchanan of the University of York said, “Shakespeare’s Rose Theatre is not a historical reconstruction of the early modern Rose playhouse… It is an approximate and suggestive architectural allusion to the idea of the early modern playhouse.” The London Rose Playhouse was built in 1587. Although the two Roses share features such as a similar number of walls (13 and 14) and minimal ceiling, the resemblance ends there. The anachronistic nature of the theatre and village provided an immersive, albeit historically inaccurate, experience.

But what was the cost? Visiting the village was free. However, The Guardian quibbled over the high ticket prices. As a student, anything above the groundling’s £12.50 (plus booking fee) was heinous—and prices did go up to a staggering £54.95. The steep prices might have embittered those who refused the peasant experience (honestly, bring cushions, you’ll be fine). But for schools, there were specific performances at £10 a ticket and discounts again at public performances. Over 3,000 school children watched a production for free courtesy of the Rose Bursary Scheme.

The experience of seeing Shakespeare in such an immersive environment revitalised the plays. Because of the location, its educational focus, and sheer multitude of shows, for one summer in York, Shakespeare became more accessible than ever.

“[York] is where [Shakespeare’s Rose] belongs,” James Cundall, chief executive of Lunchbox Theatrical Productions said before the final performances. “What is striking is how quickly it has become part of York’s fabric.” This was true. Working as a waitress, I served many customers going to or coming from a production. York had Shakespeare fever.

Macbeth was excellent; I went back to see Romeo and Juliet soon after. Theatre, with all its Elizabethan and modern charms, had become a part of York for tourists, locals, and students alike. Shakespeare’s Rose will return to Castle Car Park this summer. This time, Henry V, Twelfth Night, The Tempest and Hamlet will be reborn.