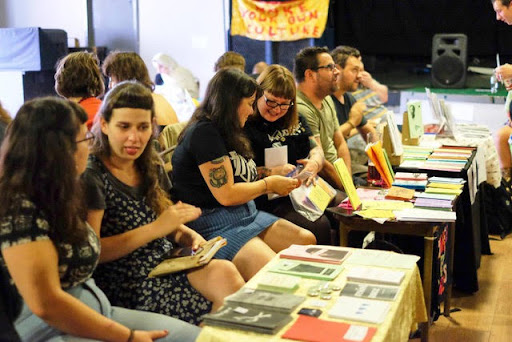 Do It Together: An Interview with Jade Blood of York Zine Fest – Part 1

This interview with Jade Blood – Northern based artist, teacher and founder of York Zine Fest – is part 3 of a 3 part series. This is the first part.

Jade is a Northern based artist and teacher at Bootham School, as well as one of the co-founders of York Zine Fest alongside Kayti Peschki. She specialises in running print workshops for schools and charitable organisations, and is a member of The Collective Studio in Newcastle. Having worked as a DIY artist for the last 10 years, her research interests include collaborative art, craft and textiles, and collective work. She talks to Gan Chin Lin about zine culture, redefining ‘DIY’, and radically re-imagining  art education.

How would you describe York Zine Fest, for someone who may not be familiar?

I would say that it’s an event at The Crescent, and it’s free. We have lots of stalls, kind of like an art market. It’s people who self-publish their own booklets or magazines: it can be comic books, poetry, chapbooks, a feminist zine…

Zine culture is based on trading, and keeping the price really affordable. So it’s a good way for artists who want to kind of get their work out there and, you know, make a little bit of money… You’ll often see people going across to other stalls, taking their zine and saying, Hey, I really like your work, can we swap? – and it’s just lovely. It leads to a lot of conversation and people working together.

It’s quite powerful, especially when how many artists actually make it, you know? And live a super comfortable life from art work? Not a huge percentage of people.

It’s taking ownership of your own work, and feeling empowered that you’re not part of an elite art world. You’re talking to other people that are in a similar boat to you… reaching out and making friendships, which has always been a kind of huge thing for me. Working with and meeting other artists, and writers, and poets. Taking back that power, being sort of proud of it, and owning it is something that you all have in common.

A lot of people will come along who want to start making zines, or do something creative. It’s quite powerful for [them] to think, Oh my gosh, I could do that. And that’s a really nice feeling. To know that people might start their creative journey, by seeing how easy it is.

What does ‘Do It Yourself’ (DIY) mean to you in the context of your community, and your artmaking?

When I started university, I didn’t realise that I’d already been a part of a DIY community until I started reading things and thinking: Oh, this is actually legit –  there’s a whole language around and even academics exploring what this kind of culture is.

I used to go along to a lot of punk gigs when I was a teenager, in the middle of nowhere, put on by my friends; that was ‘DIY’. Then I sort of wanted to start doing events and bits and bobs because I was just not seeing anything that interesting that I wanted to do in York. I was like, Why do I have to go to Leeds or to like another city to do something that feels interesting to me?  ‘DIY’ means finding people with similar values, and starting something – even if it’s just really small – that didn’t exist before, and making your own culture.

But I think it can be overused. I was reading a great article about the privilege of ‘DIY’. If you don’t have any capital, and you’re kind of doing something in a group, and no one’s being exploited… if everyone’s doing it for free and fun, that is what ‘DIY’ should be. So I think it’s a good idea to start renaming it ‘DIT’ – Doing It Together. Because no one wants to be on their own. That’s why you do things, you know – to connect with people.

Thinking about ‘DIT’ after a period where we couldn’t leave our homes, how was the first zine fest after social distancing?

We were struggling to decide whether we would even still go ahead, the day before. A lot of people dropped out because they had COVID… Basically, if you caught COVID that weekend, you couldn’t go home for Christmas. So everyone was just having to make this choice of… do I still do it? And again, it’s all about how they’ve made everyone kind of internalise everything and blame themselves… the kind of individualistic kind of thing that the government is doing, like – Oh, it’s up to you.

We went ahead anyway. We spoke to The Crescent who were like, it’s basically just like going to Marks & Spencers. We didn’t have as many people there, we spaced everyone out a bit better than usual, kind of measured it all…. asked everyone to take lateral flows and wear masks. We were like Yeah, okay, we’re just gonna do it because we’ve put all this effort in, and so have all the people making all their work.

I think it was worth it. I hadn’t seen a lot of the people that I would see three or four times a year. So, it was lovely. And obviously meeting new people. The change was definitely logistical, but everyone seemed happy to be there, to kind of talk to people again.