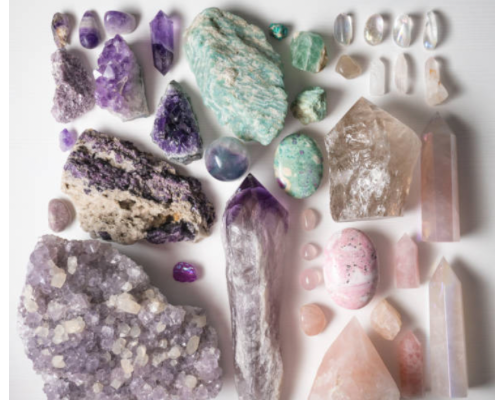 Did anyone else’s mam have hordes of crystals and drawers full of tarot/angel cards in the 2000s? Does the smell of incense give you déjà vu? Any distant memories of being given angel figurines made of crystals to help you with your SATs in 2011?

Maybe that last one was a little specific.

Many of my most specific core memories from childhood rely on my mam – a self-identified 70s/80s “peace-loving hippy” – and her love for crystals, holistic therapies, angels, and all things spiritual. As you can probably imagine, our generation’s newfound love for it took both her and me by surprise; it’s fascinating to see many of my peers sharing mam’s passion which, until recently, was relatively niche. Young people – specifically young women – finding solace in crystals and the like poses many questions about our generation’s relationship with spirituality and religion.

Interestingly, this generation’s interest in spirituality comes at a time during which religious identity appears to be dwindling. According to a 2016 study by the European Social Survey, 72% of UK 16–29-year-olds surveyed identified as having no religion, and speaking broadly, few of my own friends have expressed a strong loyalty to organised religion beyond a familial or cultural connection.

Conventional spirituality as we know it – encompassing crystals and the use of incense, by way of examples – is inherently linked to religion. Crystal healing dates to Ancient Egypt and is used by Buddhists today, and incense is commonly used in Hinduism, Judaism, and Christianity as part of worshipful acts.

Though there are many intricacies within the expansiveness of spirituality and organised religion, arguably, the most tangible distinction is that the general title ‘spiritual’ relies on a strong awareness and connection with ourselves and a higher power, as opposed to having faith in God. Many spiritual practices may be done with the intention of attracting energy or spiritual assurance, but nevertheless, they are centred around the self, distinguishing them from the communal and worship aspects prevalent in much organised religion. Owning crystals with the belief of them having healing properties, reading tarot cards for a sense of assurance, meditation for mindfulness, just to name a few, are all inherently self-centric.

Despite the connotations of the phrase, ‘self-centric’ activities are certainly not bad things. Acquiring peace in our fast-paced world is difficult, and with the mounting pressure to keep bettering oneself, it’s no surprise that young people have collectively decided to adopt rituals to help our wellbeing.

I strongly believe that it is the stress of constant competition, and a general unhappiness with the state of the world, that has led young people to adopt spiritual practices and raid their local ‘witchy’ shops. Although what we see on our TikTok feeds is a heavily aestheticised version of the spirituality that I grew up watching my mam practice – as many things are in an age of social media – it’s nice to see so many of my peers finding solace and peace in this day and age.

Heaven knows, we need it!