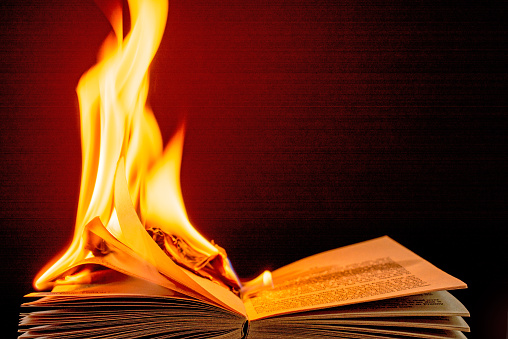 ‘Purist and Elementary’: Issues of Censorship and Book Banning

Book banning and censorship feels like an issue of the past. A concept which elicits images of bonfires being fuelled by the pages of political novels promoting ideals opposing the Government. Yet, some local authorities, particularly in the United States, still use this seemingly archaic and restrictive method to control the education and thinking of its population.

Lord Horror, by David Britton was the last book to be banned in Britain in 1991. Presenting an alternate history where the Nazis won the Second World War, it was banned under the Obscene Publications Act after review copies were seized by authorities. These were found to contain extreme violence, anti-Semitism, and racism. It was then ruled that the remaining print runs had to be destroyed, yet the whole ruling was overturned in 1992. Despite this, the book still remains out of print and consequently is a very rare and difficult find.

The 90’s was three decades ago, but in the United States, books are still being banned today. Toni Morrison’s debut novel The Bluest Eyes is one of the latest casualties of the tirade of abuse against writers of colour and LGBTQ+. In a 4-3 vote, the Wentzville School Board voted to ban The Bluest Eye, a novel which follows the experiences of a young Black girl living in the aftermath of the Great Depression. This ban was imposed after a parent complained and wished for the title, and similar titles, to not be available to their children. During a Wentzville School Board Meeting, one member said, ‘By all means, go buy the book for your child […] I would not want this book in the school for anyone else to see.’

The Bluest Eye has been praised for its content, as have many other Morrison novels. Morrison has been admired for the way she holds up a mirror to society and questions their morals and human nature. She achieved this with her debut novel, and it is still applicable to our society fifty years on. And this is what some American parents don’t want their darlings to read. Books by people of colour which expose the racism and discrimination within the fabric of society is not something to shield your child away from. Morrison herself said that book banning was the ‘purist and yet elementary kind of censorship designed to appease adults rather than educate children.’

No Left Turn in Education, a conservative group with followers in Missouri, features at least 75 books on its website which they claim ‘are used to spread radical and racist ideologies to students.  They demean our nation and its heroes, revise our history, and divide us as a people for the purpose of indoctrinating kids to a dangerous ideology.’ It is no surprise that nearly every one of these books features a character of colour or LGBTQ+ member.

Book banning and censorship very much isn’t a thing of the past. People are constantly campaigning for LGBTQ+ and writers of colour to be censored, or banned altogether, to protect their children from the ‘obscenity’ within. If it wasn’t already challenging enough for marginalised groups to actually get published, they now face the wrath of white people wanting to silence their voice.