Secondhand books don’t often have much financial value. However, last year 54 million used books were sold online in the UK. So, what is the appeal? Don’t get me wrong, I love a shiny, previously unopened paperback from time to time but there is something about secondhand books that captures me more.

The value of secondhand books comes from finding other people’s personalities inside. Each one is a story within a story. In the summer of 2021 an unsuspecting reader got more than he bargained for when he bought a secondhand copy of John O’Farrell’s The Best A Man Can Get. Inside the book about a married man living a double life he found an angry note from ‘Sarah’ berating her husband ‘Chris’ for doing the same thing. The hand-written note read ‘Chris, is this what you thought you could do with me? Lead a double-life with your so called “recreational relationships” ’.

While that story within a story was inserted intentionally, they can also appear more unexpectedly. For a university module I ordered a used copy of Mary Beard’s Confronting the Classics. I expected to find the usual pencilled annotations or folded corners that come with previously owned titles, but not a receipt. 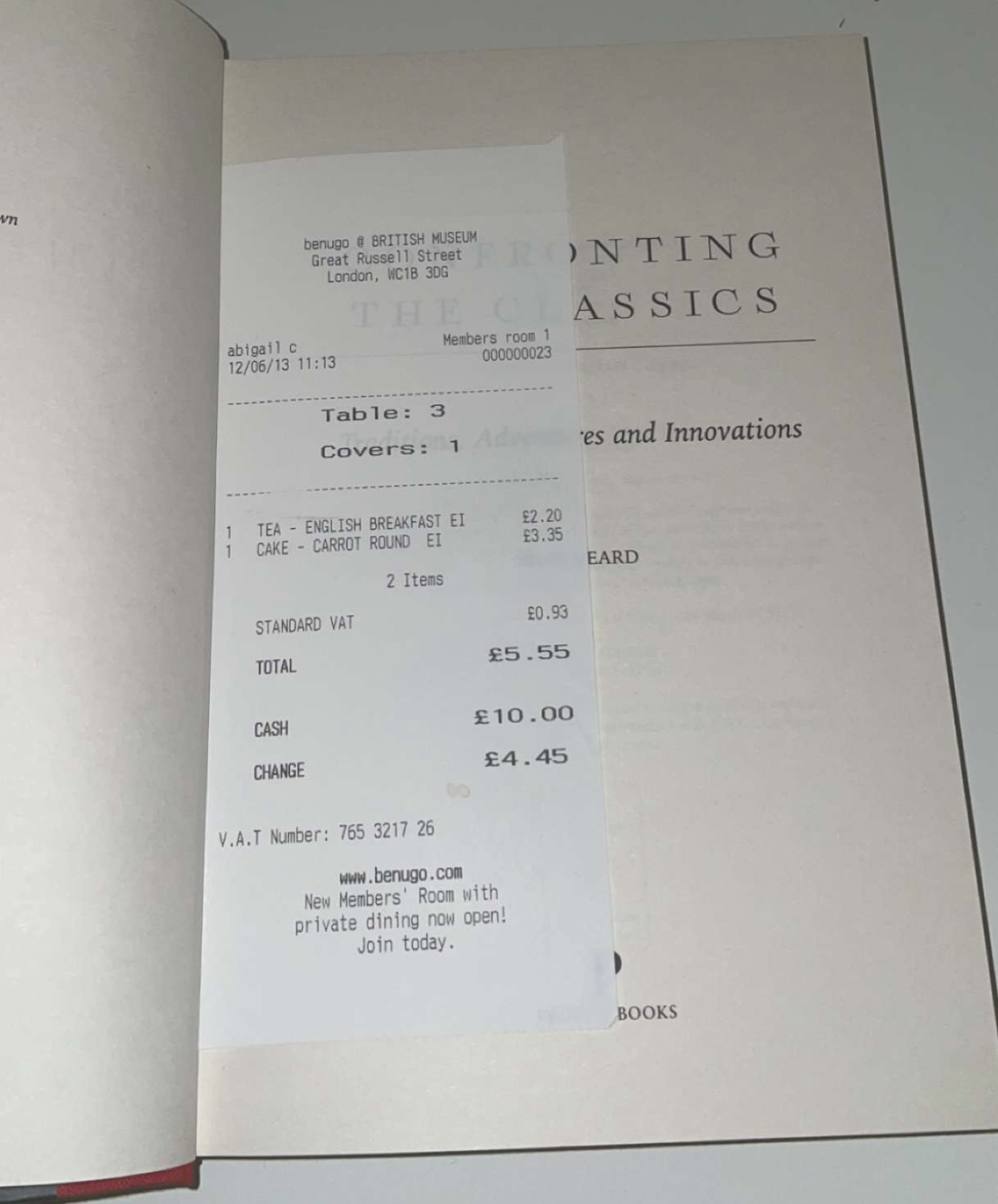 When I opened the first page I was surprised to find one dated 2013 from the Members’ Room of the British Museum in London. Hailing from Manchester myself, it opened a world of curiosities. I wanted to know who had read this book with a tea and carrot cake in hand. An academic or someone with an amateur interest in the ancient world? Surely a hot drink and a sweet snack is the epitome of a typical book lover?

In Shaun Bythell’s The Diary of a Bookseller, he records the story of a man who finds his father’s old Latin text book in the shop. Bythell recalls, ‘It was a Latin school textbook and he hurriedly opened it and pointed to the name written in fountain pen on the endpaper, ‘It belonged to my father.’ The book was £4.50, but I told him that he could have it for free.’

For the customer, the unexpected emotion and sentimental value attached to the book is what makes it so precious. As perhaps the only written record of his father’s handwriting, a new copy of the text would be worthless. Bythell recognises the personal value when offering the book without charge. Sometimes we cannot put a price on the unique stories hidden within a secondhand book.

Whilst it can be exciting to open a new book for the first time, secondhand books offer more long term satisfaction. Poring over the details to try and figure out clues about the last reader’s personality offers endless amounts of extra engagement. As with the short story, secondhand books intersect at a specific moment of somebody’s life. I almost find myself disappointed when such details fail to emerge.