As Ed Balls Day returns, what new literary talents will it inspire?

Happy Ed Balls day! It’s celebration time, as today marks the tenth anniversary of its birth. For the past decade, a very niche and underground #edballsday subculture has been thriving, unacknowledged. I think it’s time to start paying attention.

Let’s go back to that day, exactly 10 years ago. It’s a seemingly ordinary Thursday afternoon in 2011, but, as the clock strikes 4:20 pm, history is made. Ed Balls, then Labour MP and Shadow Chancellor, tweets “Ed Balls”. 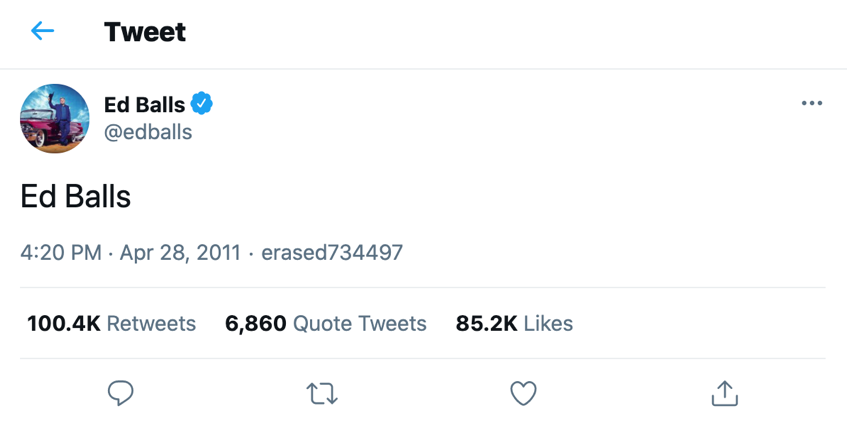 Why did Ed Balls tweet his own name, you may ask? It’s since been revealed that Ed Balls’ aide (allegedly) told him to look up an article about himself on Twitter. He got distracted by a phone call, and the rest is history. Oh, and he didn’t know that you could delete tweets, apparently.

Twitter went wild for this. Some simply tweeted the words “Ed Balls” themselves. Others made snarky comments or jokes at Balls’ expense. The following year…no one tweeted about it. But the year after that, the tweet found itself back on twitter! The hashtag #edballsday was born, celebrating the anniversary of Ed’s blunder. Since then, a spew of memes about Ed Balls Day has appeared on twitter every year (and even Ed Balls himself now gets involved). What is most interesting, though, is that nestled in the feed of #edballsday tweets, something unexpected has begun to appear – slowly but surely, poetry has made its way onto the scene.

The most successful are by poet Brian Bilston, who first tweeted a set of #edballsday poems in 2014. The poems were written in the twitter format, and so confined to 140 characters. They did not perform very well (thirteen retweets between the two).

Brian Bilston is not the only poet to foray into the Ed Balls literary sphere. Some examples include…

…as well as a number of parodies of Clement Clarke Moore’s “A Visit from St. Nicholas” (for the festive cheer), one poet’s rendition of “Sonnet 18” (where most of the words are replaced by ‘Ed Balls’) and a parody of Edgar Allan Poe’s “The Raven”.

The range is staggering. Witty, heart-breaking, bizarre and political, Ed Balls Day poems seem to transcend the confines of genre and format, creating something inspired and unprecedented.

So, this year, make sure to keep an eye out for any new talent under the #edballsday hashtag. Who knows, you may even want to get involved…(and rack up a few retweets for yourself in the process, of course).