Minecraft and the Story Map 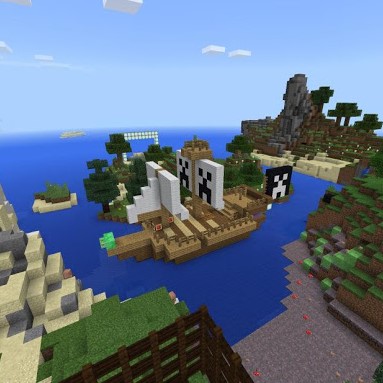 Video games may not be the first thing that come to mind as a way of encouraging children to read, but they’re exactly what computer scientists at Lancaster University are using to promote literacy. LitCraft, a ground-breaking project that maps the settings of children’s stories in Minecraft, is aiming to engage children with books by introducing interactive exploration alongside reading in the classroom.

So far, the re-creation of Robert Louis Stevenson’s Treasure Island has let children scout around every corner of Jim Hawkins’ world. Exploration and building tasks, directed by teachers, aim to get them thinking about the story’s landscape and how it builds the pirate archetype. More titles are in the works, including Kensuke’s Kingdom and Robinson Crusoe.

LitCraft’s release coincides with news that only one in ten children spend time reading for pleasure. Conversely, nearly 50% of boys (and 10% of girls) spend some of their free time gaming. By bridging the gap between the two, the project hopes to draw in keen gamers who might not otherwise be interested in literature. If successful the benefits could be far-reaching, as recent findings from the National Literacy Trust suggest that children who enjoy reading have “significantly better” mental wellbeing than their peers.

Hand-drawn 2D maps already work well for breaking down literary concepts and it is easy to see why transforming them into 3D games is popular with children. Testing of LitCraft’s Treasure Island map has yielded positive responses from primary-age children, with many asking their parents to buy the book after playing the game. Librarians have also shown an interest in the project, which is now providing boxed resources free for central libraries.

LitCraft is part of a larger scheme called Chronotopic Cartographies, a project that uses natural language processing to transform text into a range of static and 3D maps. It takes its name from the unity of time and space in a novel – called a chronotope – and aims to solve a major conceptual problem with mapping fictional worlds that have no real-life geographic information. By drawing on place names and descriptions given in novels, the project hopes to create highly accurate, integrated and immersive models that can connect critical analysis to spatial visualisation.

Currently, rendering a novel’s setting as an interactive map remains an intensive manual undertaking. A number of painstakingly hand-built versions of Hogwarts and King’s Landing exist in Minecraft as a fandom-powered ode to their respective series, but their educational use remains limited. A scientific system of literary map generation, LitCraft’s creators believe, could transform what these maps reveal about their books: narratorial reliability, mood changes and how subjectivity affects the awareness of space could all become available for exploration.

Moving forward, LitCraft is looking to explore the possibilities of multiplayer in a Lord of the Flies adaptation. Playing out scenarios from this popular GCSE text in the virtual world is designed to engage older reluctant readers, gently opening the digital door to a lifelong love of books.