Review: ‘Narcissist in the Mirror’ and the Power of Self-Reflection 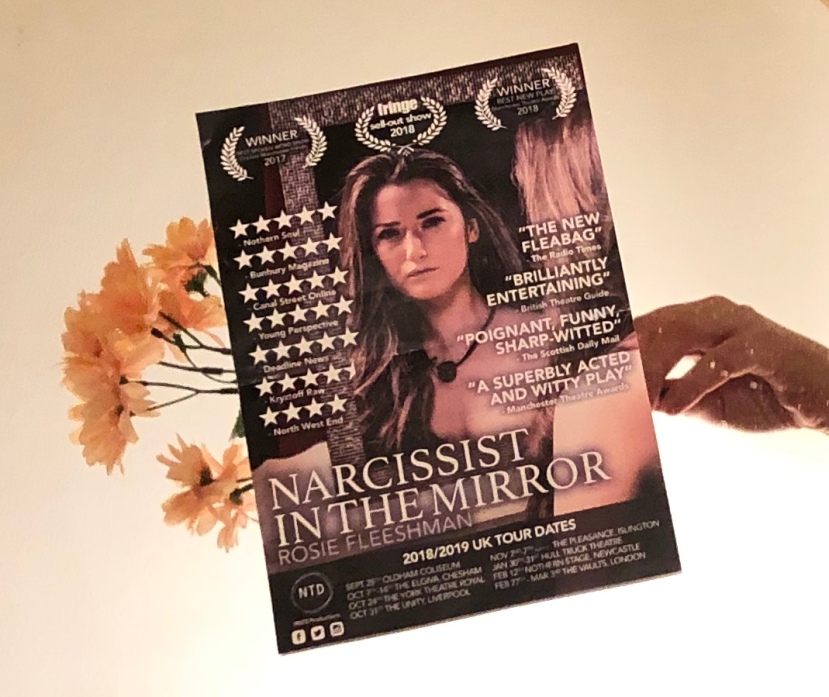 ‘It’s very much about millenials’: Rosie Fleeschman’s one-woman play Narcissist in the Mirror opened in January this year, adding a new voice to the rising genre of female-authored, first-person narratives which explore what it means to be a millenial woman.

Fleeschman’s diary entries from a sabbatical in Bangkok formed the basis of her protagonist’s – unnamed in the show, but referred to as ‘Narc’ in interviews – development, stemming from her fascination with ‘the revelation of looking at yourself in the mirror … that idea of somebody really learning about themselves in a short amount of time, someone who really didn’t like a lot of what they saw.’ The play opens on Narc staring at herself in a mirror, a clear invocation of the classical Narcissus, in love with her own reflection. This indicates how our assumptions about Narc are intended to be subverted, as Fleeschman makes sure to give us a moment alone with our judgements before Narc leaps into action, turning to address us, for an hour, with intense honesty. In her desire to ‘let you penetrate places no one’s ever been’, Narc is making herself truly vulnerable, reflecting upon herself for the purpose channeling what is authentic into artistic expression – which is exactly what Fleeschman herself has done, by channeling her self-exploration into Narcissist.

The numerous hints of autobiographical content in the play, such as stories of Fleeschman’s real-life family, are able to blur the line between fiction and reality. In doing so, parallels are drawn between Narc’s own disguising of her depression with excessive bravado, and the way the label of ‘narcissist’ forcibly disguises young millennial women’s attempts at self-discovery as self-obsession. The spoken word elements of the play serve to move the character back and forth over this line, as real memories conflate with poetry, weaving the narrative back and forth between monologue and soliloquy. ‘It’s very much like a musical’ Fleeschman agrees, and, just like musicals, the spoken word sections are where Narc’s inner thoughts come to the surface: ‘I want you to check out my sexy mind … fill your hands with the weight of my thoughts, not my breasts, and rest assured if that is too much for you – press delete, swipe left, forget someone new.’  Her fiction, her desire, is true emotional connection: her reality is tinder.

In a tense finale, Narc’s monologue is interrupted by a voice shouting for her services. The performance is shattered. Narc was a backstage worker all along, pretending to be the star. She falls silent for the first time, and undresses silently, a jarring reduction of her confidence and a physical expression of the insecurity behind the character. It is reality, ultimately, which has ended Narc’s self-expression. Fictions which are constructed through creative expression, such as spoken word, writing, social media, or simply the way they choose to dress, can liberate young women to reflect upon their realities in new ways – not so they can fall in love with the reflection, but so they can understand it.