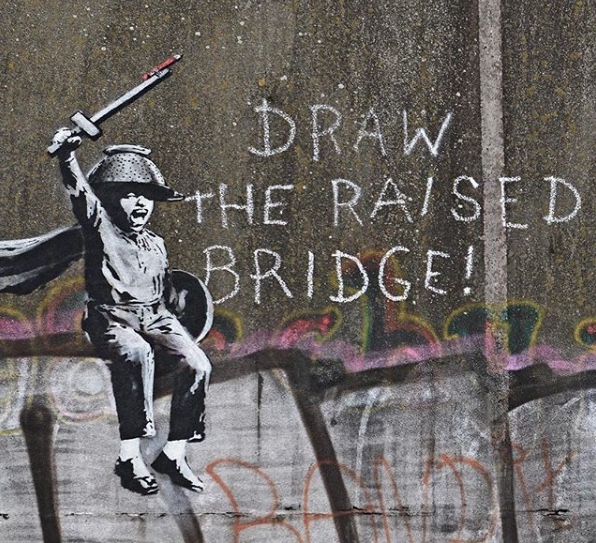 The March 2019 deadline for the UK leaving the EU is looming. Politicians, celebrities and everyday folk alike debate the pros and cons of Brexit and a second referendum. Ever the controversialist, Banksy has turned his political paintbrush towards Brexit.

Bansky’s mural in Dover, which shows a builder removing a star from the EU flag, sparked much critique. This January, its sequel stood on the upright Scott Street Bridge, Hull. A boy, armed with a colander helmet and bin-lid shield, brandishes a cape and wooden sword to boost his war cry: “DRAW THE RAISED BRIDGE”.  Banksy’s Instagram alludes to the word play in his piece, using the caption “RAISE THE DRAWBRIDGE. Hull.”  He toys with his followers, teasing them by pointing out his play on words, which transforms himself from artist to political antagonist and makes art and social media post interchangeable.

Look closely. A pencil is taped to the sword as another deliberate sign of drawing. Some think this represents how words and images are now often the weapon of choice in political dispute. Others have connected raising a drawbridge to the ironic interplay between Hull’s status as the UK City of Culture 2017, and its high percentage of ‘Leave’ votes (so much so it’s in the top 25). British culture and being anti-immigration seem inseparable…

This isn’t the last Brexit-bashing from Bansky. His Vote to Love bore a £350 million price tag: an ironic nod to the amount promised to the NHS each week by the ‘Leave’ campaign.

Banksy used his Instagram to reveal that an earlier version of the piece, submitted under a pseudonym, was rejected for the 250th Summer Exhibition at the Royal Academy of Arts, and then accepted under his own name. Expanding the narrative surrounding his work using the caption, Banksy takes a stab at the fickleness of the art world.

But, is he a hypocrite? Just as the Royal Academy need big names to promote their exhibitions, Banksy’s further politicising of his art through social media is his version of publicity: controversy pays and is as essential to the Banksy brand as anonymity. Banksy’s latest promotional stunt videoing the shredding of one of his most-loved works after its auction is just one example, as it’s estimated to have doubled in value. Brexit could prove another bank-building phenomenon for Banksy.

There’s nothing more fitting than contemporary art addressing current issues and it’s often the responsibility of cultural works to do so. Using Instagram to catapult his latest piece into the social media realm extends Banksy’s reach, opening the narrative of global affairs to a wider audience. But does it make a difference? Or does Banksy the Remoaner simply feed into exactly what many disgruntled parties want to hear and sit back to watch the profits roll in.