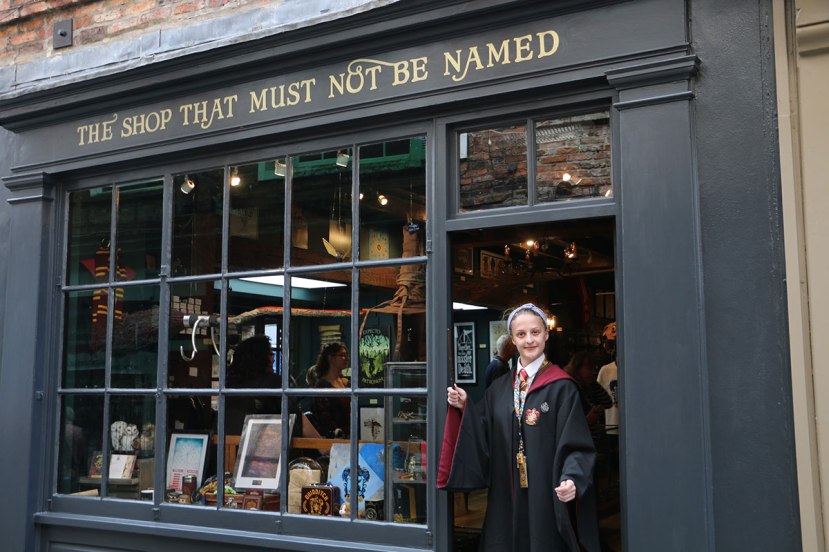 A Harry Potter store on the York Shambles, a street said to have inspired Diagon Alley.

The Oxford Dictionary of Science Fiction defines ‘world building’ as ‘The creation of an imaginary world and its geography, biology, cultures, etc.’ Over 1,200 of these worlds are catalogued in Manguel’s Dictionary of Imagined Places. Think of Middle Earth, or the Star Wars Universe. Instead of remaining fictional, however, some worlds manage to become part of reality, almost as if they’re imagined into existence. If you look, they’re everywhere.

This transition of a fictional universe into ours is the Harry Potter Effect. Indeed, the most famous example of this phenomena is perhaps Rowling’s Harry Potter series. What began as a novel and a form of world building has, in the space of two decades, became a global empire. From merchandise lining the shelves, to a colossal theme park in Florida, Harry Potter’s world is widespread. So much so that ‘muggle’ has now entered the dictionary, and themed stores are popping up on the streets that inspired the fiction.

Today, there are dozens of imagined worlds occupying our own. You might fancy becoming a Jedi, or visiting a Westerosi tavern. Nonetheless, there are far more examples of worlds –  meticulously designed by authors – that don’t make the cut into reality. Pratchett’s Discworld is one such example. Robert Collins wrote that Pratchett was writing about wizards ‘…long before anyone had heard of JK Rowling.’ Despite this, Discworld has not resonated in the same way, which left me inquisitive. How do some worlds manage to become a part of our own? Possibly, it’s down to popularity and commercial success.

Giants like Game of Thrones and Star Wars are multibillion dollar worlds, with Harry Potter reigning as king, worth $6.6 billion. Conversely, Pratchett once claimed to be ‘allergic’ to Hollywood, so perhaps it’s an author’s disdain for the film industry that that prevents a collision of universes. Of course, there is also time to consider. The reason this is the Harry Potter Effect and not the Dorothy Effect may be because Rowling built a world in an era in which tales have a greater impact, thanks to TV and social media. Whatever the reason, it’s a curious cultural phenomenon and, like most phenomena, difficult to pin down.

Regardless of factors like commercial success, it is undeniable that writers like Pratchett have immense creativity and willpower when it comes to world building. I once attempted to take on the astronomical task of world building and gave up in a day. So, for anyone to do it well, and over the span of forty novels, is astounding. One may wonder if the absence of an imagined world in everyday life equates to a kind of failure, but I wouldn’t think so. In fact, I’m certain that the decades of labour Tolkien put into creating Middle Earth wasn’t in the hope of a Mordor theme park. There are far more significant measures of literary success than the Harry Potter Effect. Perhaps each built world, from Atlantis to Oz, should be viewed as a mark of a creator’s dedication to their craft, and, more importantly, a place to be inspired.