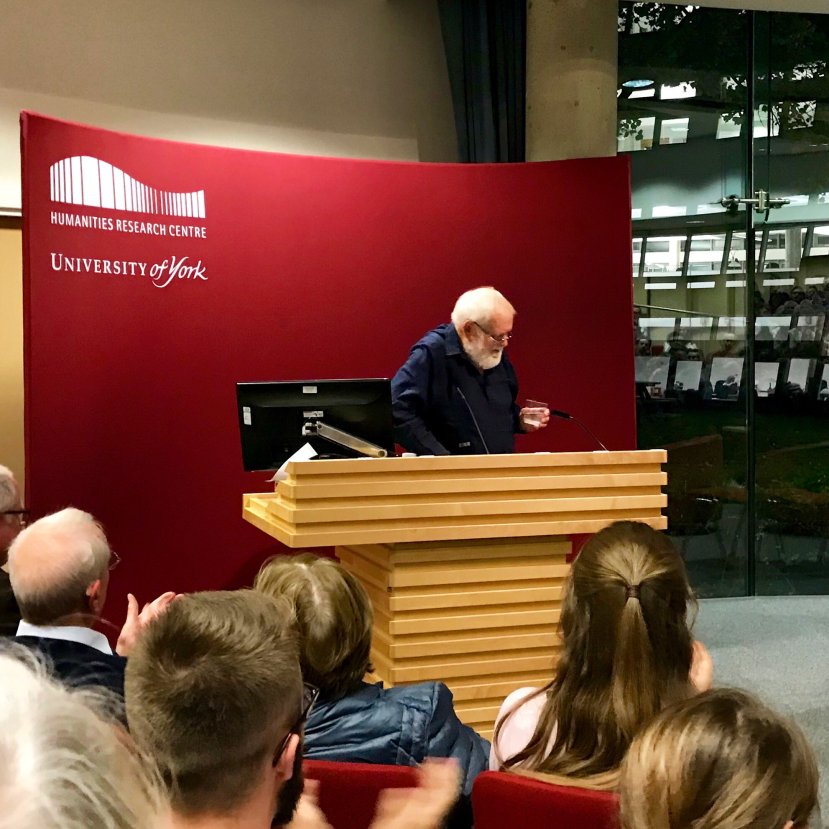 Sharing a space with prestigious literati is always special. To hold audience with Michael Longley at a Writers at York event on the 12th of October was transcendent. Heightened by circumstance – the recent publication of his new poetry collection, aptly-titled Angel Hill – Michael had, the night before, been awarded and lectured for the PEN Pinter Prize alongside his nominee Mahvash Sabet.

Michael’s appearance is appropriately bookended by the University of York’s Professor Matthew Campbell, a scholar of modern poetry and Irish literature. Matt sketches the scene of Michael’s position in the Irish poetic canon and lauds him as “the last of the war poets” and “the last of the nature poets”. Comparing Michael to Irish rugby players and concluding that Michael is probably Mike Gibson to smirks and scoffs of approval. The two mutually display “athleticism, grace, and command”: Gibson on the pitch; Longley on the page and now standing at the lectern. Michael affably rebuffs this and contends he models Jack Kyle as “the elusive centre”.

At this point, two latecomers announce their arrival and query the host whether they are in the right building, as they are here for a poetry reading and not Irish rugby. This humorous exchange elicits a tremendous roar of laughter from Michael’s frame and extends around the room into the audience.

Michael proceeds, after ovation, to read numerous poems from throughout his career and his latest collection including: ‘Pinemartins’, ‘Snowdrops’, ‘The Sonnets’, ‘Age’, ‘The Poets’, and ‘Ceasefire’. He opens with ‘The Linen Industry’. Watching Michael expound upon the processes of work and regionalism is fascinating. He deftly explores the ways they are codified in the class markers we unknowingly hold.

Michael’s reading of ‘Harmonica’, the melding of classicism and familial memory, is something I had unconsciously emulated in my poetry. Hearing the deliberate and calculated nature of his reading, the dramatic gravitas and exactitude he exercised wilfully, and moreover his outpouring of knowledge about poetics profoundly moves me. I emotionally buckle at this display of passion and lament about paternal relationships.

Regaining composure, Michael then indulges us with a not-often-performed recitation of ‘Petal-wart for Michael Viney’, at the request of Professor Hugh Haughton. Witnessing Michael take this request connoted the authenticity that punctuated the evening.

Humane candour rears its head once again as ‘Room to Rhyme’ is aired. Michael details both before and throughout the poem his dear friendship with Seamus Heaney. He delivers a couplet that particularly humanizes two valorised poets in a fashion that suitably closes the evening:

“We peed against a fragment of stone wall,
St Patrick’s windbreak, the rain’s urinal.”

It feels most natural to use the first names of the cause celebre, despite not being able to make acquaintance with him personally. To be present in the aura of one of the British Isles’ greatest living poets and hear him read so earnestly in such an intimate setting provokes a feeling of proximity to the poet that the printed word will struggle to reproduce.