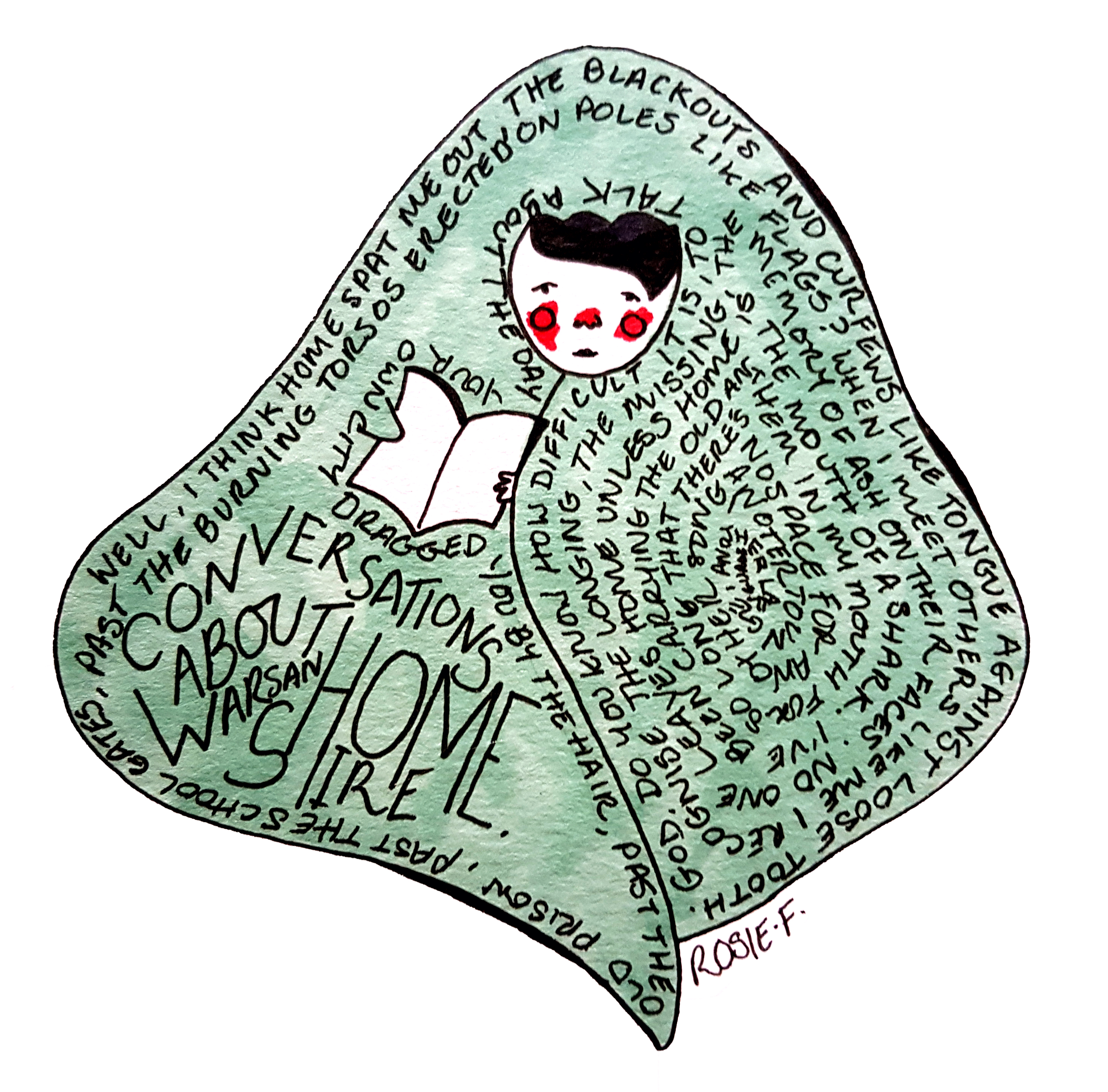 So, you’ve read Rupi Kaur – here’s who you should be reading next.

Rupi Kaur has been described by many as a publishing phenomenon, and rightly so. Her poems, initially self-published on Instagram, have sold many thousands of copies in her two collections. They are short, emotive, easy to understand and relatable. She is the perfect introduction to loving poetry. If you are a fan (which I will assume you are, having clicked on the link), Kaur can be the perfect gateway into a vast world of poetry. Here are a few modern and classic poets for you to wrap yourself up in – who all explore similar themes to Kaur, but in their own remarkable way.

Shire is a British-Somalian poet who in 2013 won the Brunel University African Poetry Prize. Her words were used by Beyoncé in the video album Lemonade, and more impressively have been described as “a rallying cry for refugees”.

As a child, relatives wouldn’t hold her.
She was splintered wood and sea water,
she reminded them of the war.

On her fifteenth birthday you taught her
how to tie her hair like a rope
and smoke it over burning frankincense.

You made her gargle rosewater
and while she coughed, said
Macaanto, girls shouldn’t smell
of lonely or empty.

You’re her mother.
Why did you not warn her?
That she will not be loved
if she is covered in continents,
if her teeth are small colonies,
if her stomach is an island,
if her thighs are borders?

Who wants to lie down
and watch the world burn
in their bedroom?

Your daughter’s face is a small riot,
her hands are a civil war,
a refugee camp behind each ear,
a body littered with ugly things
but God,
doesn’t she wear
the world well.

Buy Shire’s collection Teaching My Mother How To Give Birthhere.
Read a Guardian article about her here.

This British poet and model started self-publishing her poems on Instagram. In her almost biographical collection Bone she chronicles her upbringing as a Seventh Day Adventist, her sexual awakening and mental-health.

It isn’t that dad doesn’t love you or your brother
said Mum, greasing up our ashy legs with Vaseline
Or that your auntie Amy’s a man stealing back-stabbing, cheating bitch
who can’t keep a man so she has to steal somebody else’s.
We just don’t see eye to eye on much, that’s all
and he wouldn’t stop eating cashew nuts in bed
It’s not that you mother and I hate each other
said Dad, pushing a crumpled ten pound note into my chinos pocket
…or that I forgot about your birthday
but I need time to think now. I’m moving in with Amy
and anyway, your mum cooks with too much salt.
It wasn’t so much an affair, you understand
said Auntie Amy, lacing up my brothers small Nike trainers
and picking out my knots with the wooden comb shaped like a fist
but a meeting of minds outside of our respective vows
And bodies, muttered mum, when I told her later.
Two faced tramp. What a joke.
Don’t tell anyone I said that.
Don’t tell anyone I said that.
It’s not as though your mums exactly an angel, either
said dad with blood red eyes
and a pulsing vein in his forehead
finishing the last of his whisky
and auntie Amy hissed, Easy Winston, you’ve had enough
and dad said, Don’t tell me what to do
not even my wife yet, and you think you know it all.
It not that your family are going to hell, necessarily
said grandma, boiling up the green banana, yam and dumpling
and grating the coconut onto the rice and peas
They must just accept Jesus Christ into their lives
and put away the drink and sin and all the lies.
Now go and wash your hands and set the table.
Don’t worry, child.
We’ll pray for them tonight.

Buy Daley-Ward’s collection Bonehere.
Read an interview with her here.

This American poet began being successful after she (in her own words) let go of what she “knew about” poetic convention. Themes she plays with include her upbringing, abuse, and sex. Kaur highlighted her work as one of her main poetic influences.

I am locked in a little cedar box
with a picture of shepherds pasted onto
the central panel between carvings.
The box stands on curved legs.
It has a gold, heart-shaped lock
and no key. I am trying to write my
way out of the closed box
redolent of cedar. Satan
comes to me in the locked box
and says, I’ll get you out. Say
My father is a shit. I say
my father is a shit and Satan
laughs and says, It’s opening.
Say your mother is a pimp.
My mother is a pimp. Something
opens and breaks when I say that.
My spine uncurls in the cedar box
like the pink back of the ballerina pin
with a ruby eye, resting beside me on
satin in the cedar box.
Say shit, say death, say fuck the father,
Satan says, down my ear.
The pain of the locked past buzzes
in the child’s box on her bureau, under
the terrible round pond eye
etched around with roses, where
self-loathing gazed at sorrow.
Shit. Death. Fuck the father.
Something opens. Satan says
Don’t you feel a lot better?
Light seems to break on the delicate
edelweiss pin, carved in two
colors of wood. I love him too,
you know, I say to Satan dark
in the locked box. I love them but
I’m trying to say what happened to us
in the lost past. Of course, he says
and smiles, of course. Now say: torture.
I see, through blackness soaked in cedar,
the edge of a large hinge open.
Say: the father’s cock, the mother’s
cunt, says Satan, I’ll get you out.
The angle of the hinge widens
until I see the outlines of
the time before I was, when they were
locked in the bed. When I say
the magic words, Cock, Cunt,
Satan softly says, Come out.
But the air around the opening
is heavy and thick as hot smoke.
Come in, he says, and I feel his voice
breathing from the opening.
The exit is through Satan’s mouth.
Come in my mouth, he says, you’re there
already, and the huge hinge
begins to close. Oh no, I loved
them, too, I brace
my body tight
in the cedar house.
Satan sucks himself out the keyhole.
I’m left locked in the box, he seals
the heart-shaped lock with the wax of his tongue.
It’s your coffin now, Satan says.
I hardly hear;
I am warming my cold
hands at the dancer’s
ruby eye—
the fire, the suddenly discovered knowledge of love.

Bukowski is a German-American poet who examined the life of urban lower class in America.

So You Want To Be A Writer

if you first have to read it to your wife
or your girlfriend or your boyfriend
or your parents or to anybody at all,
you’re not ready.

don’t be like so many writers,
don’t be like so many thousands of
people who call themselves writers,
don’t be dull and boring and
pretentious, don’t be consumed with self-
love.
the libraries of the world have
yawned themselves to
sleep
over your kind.
don’t add to that.
don’t do it.
unless it comes out of
your soul like a rocket,
unless being still would
drive you to madness or
suicide or murder,
don’t do it.
unless the sun inside you is
burning your gut,
don’t do it.

when it is truly time,
and if you have been chosen,
it will do it by
itself and it will keep on doing it
until you die or it dies in you.

there is no other way.

and there never was.

Emily Dickinson was an American poet in the 19th century. These envelope poems where initially private, intended only for the eyes of the recipient of the letter. Sparse, fragmented and personal these poems are modern poetry before modern poetry. 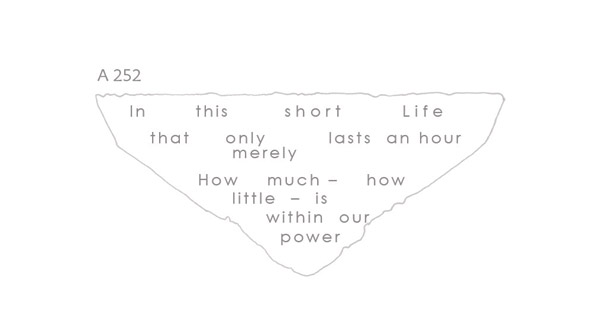 British poet and poster girl for the spoken word movement in the UK. Her career is expansive, having been the Poet in Residence at the Royal Shakespeare company, shortlisted for the 2017 Forward Prize.

They say a dead woman can’t run from her coffin.
How moonshine can orchestrate nuff wild thoughts!
It’s an hour past midnight and the road outside is quiet;
my thoughts are a twisting screwdriver; licks
of a dozen switches scorch my skin. Pomegranate flowers
line the road, each spread out from the other,
and their crumpled petals are the shocking red of death.
I am in the centre of this wreath. You chew chillies raw,
laugh, and spit the seeds, then tell me of the joys
of sitting on a big stone under Concord waterfall,
watching near-naked boys leap off the moss-green cliffs above.
Your voice is smooth liquor. Your whirring hands speak
another language. I hold a white china cup in my hand;
funny how the cracks don’t seem to show.
You in your saucy lace that binds your body like mace
covers nutmeg seeds; I am shocked by your vulgarity.
I tell you, crapaud don’t have no right in salt water.
You tell me you have a right to be everywhere.

See Booker’s work (and the work of Warsan Shire and Sharon Olds) here.
Find out more about her on her website.
Watch a performance of ‘My Mother’s Blues’ here.
Buy her collection Pepper Seedhere.